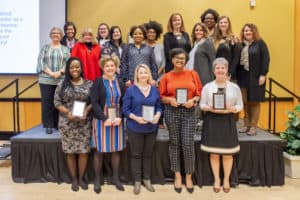 Franklin College’s Office of Diversity & Inclusion recently hosted the annual Women of Distinction Awards Breakfast in celebration of National Women’s History Month. The event, in its fourth year, is a celebration of women who have achieved, overcome and blazed a trail for other women through their professional leadership, volunteer efforts and civic and campus involvement.

Members of the Franklin College community are invited to submit nominations to honor women in each of the four categories: students, alumni, faculty/staff and community members. The nominees are then judged by a panel and a winner is selected in each category. All nominees were recognized at the breakfast and each received a certificate and a ‘Women of Distinction’ leather portfolio, while the winners were honored with a plaque.

Terri Roberts-Leonard, director of the Office of Diversity & Inclusion, and organizer of the event, presented the awards. Listed below are the winners in each category, followed by the fellow nominees:

Student: Taylor McElwain, daughter of Ms. Shannon Page of Indianapolis. McElwain excels academically and has held many leadership positions on campus, including New Student Mentor, Diversity Advocate and B.O.L.D. Living/Learning Community Leader. She is a champion of children and has served as a mentor for several children through the foster care system. Her nomination stated: “She is wise beyond her years … she stands up for and raises attention to the empowerment of women on the Franklin College campus … knowing her makes me want to do better.”

Alumna: Brooke Worland of Franklin. A 1999 alumna of Franklin College, Worland had, until recently, served as the college’s assistant provost and dean of engaged learning. Earlier this month she transitioned to a new position within the community, now serving as the assistant superintendent/director of curriculum, instruction, and data for Franklin Community Schools. One of her nominators stated: “She is a collaborative, innovative, service-oriented, results-driven and person-centered individual … she was recognized in 2016 as one of the Top Forty Under 40 by the Indianapolis Business Journal … anyone who knows her knows that she is one of the hardest working individuals that you will meet, and she does it all with a smile on her face.”

Faculty/Staff: (A tie in this category resulted in two winners.) Meredith Clark-Wiltz, of Franklin, is an associate professor of history and director of American studies. Nominated by multiple people, her nomination packet stated: “She empowers women to be their best selves by supporting them in leadership positions and helping other women be successful … she worked diligently to update the college’s liberal arts curriculum to focus on diversity … she literally impacted the entire campus community and students for years to come with her insight and expertise in diversity.”

Keri Ellington, of Franklin, is the dean of student success and retention. Her nomination included: “Her commitment to the empowerment of women is evident in who she is and how she leads … Her ability and desire to positively impact the people around her have led to amazing changes with the communities with which she is involved … she knows how to stand up for what she believes in and when to compromise … she has a way of engaging the people around her by making them feel important and valued.”

Community Member: Nieka Davis of Lawrence. A previous nominee, Davis serves as the executive assistant to the chief operating officer and director of human resources at Barnes and Thornburg, LLP. She views community service as a required part of her overall life, and not just something done on the weekend. She currently serves on the board, and is a founding member, of the Seven Beacons Foundation, which is dedicated to building stronger families and communities through the development of initiatives and support to organizations that promote education and commitment to service. Davis is both a leader and a supportive volunteer in her church and has served as a mentor to many collegiate women. For the last six years, she has participated in Franklin College’s Martin Luther King, Jr. Day, hosting campus events for young ladies on campus. Her nomination stated: “She is one of the most caring, compassionate and selfless people you will ever meet.”