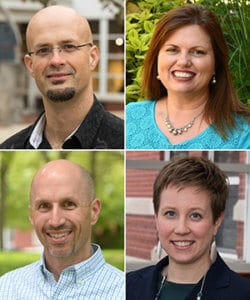 Franklin College paid tribute to four of its finest educators during the 2018 commencement ceremonies on Saturday, May 19, 2018.

John Boardman, Ph.D., was the recipient of the Clifford and Paula Dietz Award for Faculty Excellence. The award recognizes a faculty member who exhibits competence in his/her chosen discipline or profession; the ability to communicate effectively, not merely information about, but an understanding of his/her discipline or profession to students; and the ability to stimulate students and faculty colleagues to do their best work.

Boardman is a professor of mathematics. He received the Faculty Steering Committee Distinguished Service Award in 2011 and the Faculty of the Month Award in 2006. He was named the Project NExT-IN Fellow for 2004-05 by the Mathematical Association of America. He received his bachelor’s degree, master’s degree and doctorate from Northern Illinois University. Boardman has been a member of the Franklin faculty since 2003. He currently serves as a member of SPARC, the strategic planning task force leading redevelopment of the curriculum. He has presented research at Franklin College’s Math Day, at Morehead State University’s and Wabash College’s mathematics colloquiums and at Miami University’s annual mathematics and statistics conference. His research has also been included in several professional publications. Boardman resides in Franklin.

Jamie Bromley, Ph.D., was the recipient of the Faculty Steering Committee Distinguished Service Award.  The award is given to a faculty member who shows outstanding service to the college.

Bromley is an associate professor of psychology and serves as department chair. She holds a bachelor’s degree from the University of Dallas in Texas and a master’s degree from Duquesne University in Pittsburgh, Pennsylvania. She earned her doctorate in counseling psychology from the University of Akron in Ohio. Bromley began working at Franklin College in 2009. Prior to that, she served as a staff psychologist at a large university’s counseling center, providing psychological services to undergraduate and graduate students. While at Franklin College, Bromley has collaborated with colleagues to present papers at the annual Midwestern Psychological Association meeting in Chicago, supervised over 26 undergraduate research projects this year within classes in addition to independent research and has played an instrumental role in the establishment of the college’s annual Psychology Scholars’ Day, which celebrates undergraduate research through posters, demonstrations and oral presentations. Bromley was elected by the faculty to the Promotion and Tenure Committee three years ago and served as chair the past year. Bromley is a resident of Franklin.

David Cunningham, Ph.D., was the recipient of the Faculty Excellence in Teaching Award.  The award recognizes a faculty member who exhibits excellence in mastery of subject and effective communication, has respect for all students, and believes that all students can learn and provides helpful feedback to other students in a number of ways.

Cunningham is an associate professor of art. He was the recipient of the Faculty Award of Excellence in Scholarship in 2014, the Rinker Endowment Grant for Faculty Travel in 2012 and the Rinker Endowment Grant for Faculty Excellence in 2009. He has led student travel courses to Uganda and has presented papers at several art conferences. Cunningham received his bachelor’s degree in fine arts from the University of Evansville and his master’s degree in fine arts from Indiana University. While teaching at Franklin College since 2003, he has continued to work as an artist. His works have been exhibited in galleries across the U.S. and have garnered many awards at juried exhibitions. Cunningham is a resident of Indianapolis (46205).

Callista Buchen was the recipient of the Faculty Excellence in Scholarship Award.  The award recognizes a faculty member’s scholarly achievement at the college, as well as his/her work outside the college (publications, presentations, etc.).

Buchen is an assistant professor of English and creative writing. She received her bachelor’s degree from the University of Wisconsin – Stevens Point, master’s degree from the University of Oregon, Master of Fine Arts from Bowling Green State University and doctorate from the University of Kansas. She is the author of two poetry chapbooks, The Bloody Planet and Double-Mouthed, as well as the full-length collection Look Look Look, forthcoming in 2019 from Black Lawrence Press. Her work has been published in numerous journals and anthologies, and she presents frequently at regional and national conferences. Winner of DIAGRAM’S essay contest and the Lawrence Arts Center’s Langston Hughes Award, Buchen began working at Franklin College in 2015 and has been instrumental in establishing the Creative-Writing Reading Series, which brings nationally renowned writers to Franklin College. She also serves as the faculty adviser to the college’s literary journal, the Apogee, and is a member of the college’s Alpha Society, in addition to being nominated as a 2018 Woman of Distinction through the Franklin College Center for Diversity and Inclusion. Buchen is a resident of Franklin.