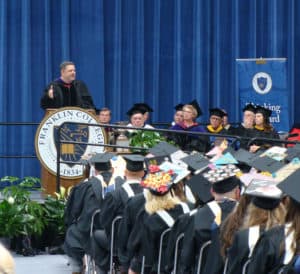 The ceremony was held in Spurlock Center Gymnasium with overflow seating in Richardson Chapel, where a live webcast of the ceremony played. Prior to his remarks, the college awarded Yonkman an honorary doctorate of humane letters; Jefferson W. Brougher, founder of Brougher Agency, Brougher Insurance Group and International Medical Group, received an honorary doctor of humane letters; and 1975 Franklin College alumna, former board of trustees chair and current board member Christine S. Fields, retired vice president and general counsel for Eli Lilly and Co’s International Operations, received an honorary doctor of laws.

Yonkman’s commencement address was titled, “Just Show Me the Way.”

The senior class speaker was Gabrielle Arthur, a native of Bedford, who majored in economics.

Here is a snap-shot about the graduating class of 2019:

Preceding commencement, on Friday, May 17, The Rev. Teresa ‘Terri’ Hord Owens gave the baccalaureate address and received an honorary doctorate of divinity from the college. Hord Owens serves as general minister and president of the Christian Church (Disciples of Christ).