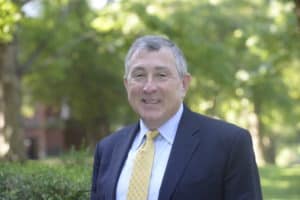 The Franklin College Board of Trustees has announced the suspension of its presidential search and the naming of current Acting President Kerry N. Prather as president, effective immediately.

“The Franklin College Board of Trustees recognizes that Kerry Prather’s steady hand, transparent communication style and committed servant leadership are needed during this time of transition to keep the college focused on the important work of doing what is best for students,” said Board of Trustees Chairman James V. Due. “The campus community and our alumni enthusiastically greeted Kerry’s appointment as acting president, and today’s announcement reflects the board’s confidence in his abilities and leadership.”

“This is a very special place to me and to our family. At Franklin, our priorities are the students we are preparing and the faculty and staff who are creating paths for their success,” President Prather said. “We will all work together as we pursue opportunities and confront challenges, always with our students as the focus of our efforts.”

Prather, who has served Franklin College in various capacities for 38 years, is a well-known and respected figure on campus. He began his career at Franklin in 1982 as an assistant men’s basketball coach, was promoted to head coach in 1983 and took on the additional role of athletic director in 1990. For much of that time, he was also an executive leadership representative on Franklin’s President’s Cabinet. In addition to his most recent roles, he previously served as acting vice president for administration and acting vice president for enrollment management. He is a graduate of Indiana University with an undergraduate degree in English and a master’s degree in education.

Franklin terminated the employment of its previous president, Thomas J. Minar, in January 2020.

College Brings “The Importance of...