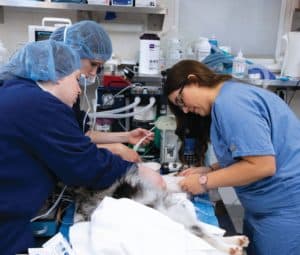 Dr. Taylor Thompson ’15, DVM, rejoiced in the sweet sound of success when her name was announced at the 2019 Purdue University College of Veterinary Medicine graduation program. Passion and persistence had paid off, and she realized her goal of becoming a veterinarian.

Veterinary school is tough for anyone, but it was a seemingly impossible goal for Thompson, who has a hearing impairment. She was born deaf and underwent Cochlear™ implant surgery at age 3. The device implanted under the skin works in tandem with a piece worn behind the ear externally. They send impulses to a nerve that carries signals to the brain, which learns to associate the signals with sounds in an individual’s environment. The device plus professionally instructed listening exercises and speech therapy during early childhood development helped address Thompson’s hearing barrier, but related challenges emerged.

“Growing up, I struggled with my identity since I was born deaf, but also had a Cochlear™ implant that allowed me to hear. I was always an outsider among my peers, both hearing and deaf. It was also difficult for me to create meaningful relationships with my hearing peers since most were not patient enough to communicate with me.” Thompson’s beloved pets helped fill the void.

“The more I interacted with animals, the more I began to appreciate the roles — big and small — that they play in our lives. I was compelled by their abilities to listen without judgment and love unconditionally.”

Her passion for pets manifested into a career dream. “I was not going to allow anyone to tell me I could not become a veterinarian because of my deafness,” Thompson recalled. “I was determined to find a way. I knew I would not be able to do some things in the same manner as my hearing peers, such as using a traditional stethoscope. However, I also knew there were other possible methods I could use that were accessible to me because I knew deaf human medical doctors and veterinarians do exist.”

After Thompson earned her bachelor’s degree in biology at Franklin College, where she attended with her service dog, Zoë, she was admitted to the veterinary program at Purdue. It was a tough program, as she anticipated, but she was focused and thriving. Then, in the third year of the program, she faced a life-altering hurdle. The implant she had relied on since 1995 stopped working.

“Everything around me fell dead silent,” she recalled. In an instant, she lost the ability to communicate readily. “I’ve always been able to lip read to an extent, but my vocabulary in terms of sign language was very limited because I only needed to use it for a short time as a kid. The implant had single-handedly been responsible for my independence most of my life, and I didn’t have a good back-up communication method.”

To further complicate matters, the earliest possible surgery date for a new implant required a two-month wait. And after surgery there were new challenges to overcome because an implant does not restore hearing but instead helps a deaf person understand speech by providing a useful representation of sounds from their environment.

“Unfortunately, having an implant replaced is not simple like replacing eye glasses,” Thompson explained. “After I received the replacement implant, it took me nearly another year before I was able to truly understand spoken language. My brain had to relearn what sounds were.”

Adapting to the new device took a toll. “Everything took twice the effort and twice as long to communicate. It was an extremely isolating experience that I would never wish on my worst enemy,” Thompson said.

Throughout that time, Thompson’s dream of becoming a veterinarian persisted. “Thanks to my husband, (Zacharia Hamm ’15), family, friends and, of course, my dogs, I remained resilient,” she said.

Finally, graduation day at Purdue came. “My diploma represents my journey. It really is a token of all my hard work,” she said.

Thompson is excited by the continuous rapid advancements in medical technology that she sees helping open doors of career opportunity for individuals with hearing impairment. She can easily list a variety of alternate methods and equipment she uses to do things differently, but just as effectively as her hearing colleagues.

“There’s now a stethoscope that converts the sound of the heart into visual waveforms I can interpret,” Thompson said. And with Doppler ultrasound she can listen to an animal’s heart without using a stethoscope. She can feel for vibrations on the machine. “I’ve learned how to recognize an abnormal heartbeat and rhythm with my hands,” she said.

Today, Thompson is a team member at Meridian Veterinary Clinic and Hospital in her hometown, Greenwood, Indiana. She specializes in caring for small animals and is passionate about returning the kindness that they have so faithfully given during her lifetime.

By Kevin Doerr/PVM Annual Report (Reprinted with permission. Edited for content and length.)