“You are an amazing class.  Your diversity is one of your strengths.  I urge you students to continue to use the FC tradition of being instruments of justice.”

“My final insight is that believing in yourself will make things happen.  And just because something has never happened before doesn’t mean it is not possible.”

Pratt was nominated on Jan. 10, 2010, to serve on the United States District Court for the Southern District of Indiana.  She was voted to the floor by the Senate Judiciary Committee on Feb. 11, 2010, and confirmed unanimously by the United States Senate (95-0) on June 15, 2010. 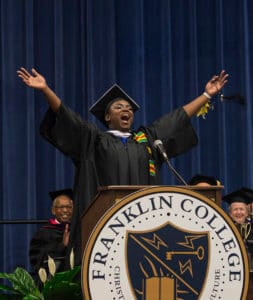 For more information, contact the Franklin College Office of Marketing and Communications at 317. 738.8185.