#GivetoGriz 2021 the Most Successful to Date
Campus News 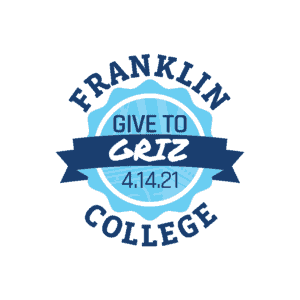 Franklin College students, employees, alumni, trustees and friends virtually joined in the spirit of giving during the college’s ninth annual giving day, #GivetoGRIZ, on Wednesday, April 14. The result was the most successful one-day giving event to date for the college.

“Our ninth annual #GivetoGRIZ 24-hour giving challenge was the most successful to date, thanks to the generosity of the many donors who supported Franklin College,” said Dana Cummings, vice president for development and alumni engagement. “This successful campaign is another wonderful example of the Franklin community coming together in support of our collective mission.”

“The outpouring of support from our loyal alumni and friends during #GivetoGRIZ is a powerful statement of faith in the mission of Franklin College and confidence in its future,” said Kerry N. Prather, Franklin College president. “We are grateful for the steadfast support of each and every donor who helped make the campaign such a resounding success.”

While the annual giving day has traditionally relied on social media and email to reach out to alumni and friends of the college who live across the country and the world, this was the second consecutive year the campaign drive was entirely virtual. The staff involved in putting this event together utilized social media, especially Facebook, Twitter and Instagram, to market this 24-hour fundraising event. They also hosted Zoom video conferences to unite professors, students, staff members, alumni and friends in virtual chat “Zoom Rooms” throughout the day, including an evening session hosted by Rafael Sánchez, WRTV Channel 6 anchor/reporter and 1992 alumnus of the college, and 2008 alumnus Matt Taylor, the official radio voice of the Indianapolis Colts.

The one-day giving challenge began in 2013, raising a total of $14,500 from 137 donors and earning the office of development and alumni engagement a Silver Award in their district from the Council for the Advancement and Support of Education (CASE). Each year, both the number of donors as well as the total monetary donations have steadily increased.

While the one-day giving challenge is over for the year, those wishing to donate to the college’s Franklin Fund during this current fiscal year still have until June 30. To give online, visit franklincollege.edu/giving/give-now/ or call (317) 738-8040.