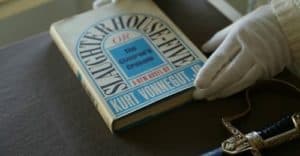 Franklin College’s TheStatehouseFile.com, a news website powered by the school’s journalism students, received a coveted Emmy from the National Academy of Television Arts & Sciences (NATAS) Lower Great Lakes Chapter for its documentary on Kurt Vonnegut’s well-known book. Produced jointly with WFYI Public Media, the piece, titled “The Children’s Crusade Revisited: Slaughterhouse-Five at 50,” won in the category of Nostalgia Program – Program/Special/Series. The documentary is told through the voices of Vonnegut’s family members, friends and scholars and provides not only an intimate look at the powerful book, but also gives an insider’s look at the man who wrote it.

The awards, announced on Saturday, June 20, 2020, were streamed on both the National’s website and social media channels, as well as those of NATAS Lower Great Lakes Chapter. Due to COVID-19, the decision was made to forego the traditional Emmy Gala this year, but that did not take away from the excitement for the Franklin College community as it anticipated the event and waited for the announcement of the winners.

“We had our own private watch party on Zoom to watch the awards,” said Franklin College senior Emily Ketterer. “John Krull (director of the Pulliam School of Journalism and publisher of TheStateHouseFile.com) hosted, and he shared his screen so we could watch it together. It was surreal watching our documentary show up when they announced the winner. Our faces just erupted in pure joy and excitement during that moment, and it was great to experience that moment together.”

Pulliam School of Journalism division head Joel Cramer was a field producer for the program. He and Krull, who served as producer of the documentary as well as the liaison between Franklin College and WFYI, guided the team of videographers on a quest to gather footage and information that took members of the group to the East Coast and back over the course of three days. Along the way they interviewed Mark Vonnegut, son of Kurt Vonnegut, in Boston, before arriving in Manhattan to speak with Vonnegut scholar Marc Leeds and author and friend of Vonnegut, Sidney Offit. The team also filmed B-roll for the documentary while in New York City.

“Winning an Emmy shows that the journalism program at Franklin College is a force to be reckoned with,” said Ketterer who is already reaping the rewards of her journalism training. She was hired by the local newspaper a year before graduation – the paper even adjusted her work schedule to accommodate her class schedule. “We are much smaller than other journalism schools, and we’ve proved time and time again that we can compete on their level. The partnership with WFYI shows future students that they can gain a unique experience producing documentaries where you can tell amazing stories and also learn so much about journalism and video production along the way.”

The documentary, which premiered in December 2019, was also one of six nominees in the Best Writing category. It was picked up for national distribution and will begin airing on PBS stations around the country this summer.

“We are so proud of our students who contributed to this impressive production, and to the faculty who led them,” said Franklin College President Kerry N. Prather. “This achievement reflects the immersive academic experience that makes Franklin College distinctive in the multimedia journalism program and across the entire curriculum.”

The documentary can be viewed at http://www.wfyi.org/programs/childrens-crusade-revisited.