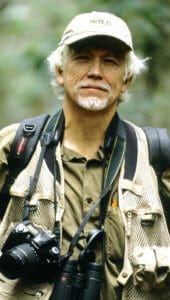 Franklin College will host the first of six lectures in the prestigious 2018 Indianapolis Prize Lecture Series presented by the Indianapolis Zoological Society, Inc., on Wednesday, Sept. 26 at 7 p.m. in the Branigin Room of the Napolitan Student Center.

The lecture, “Biodiversity Conservation: A Global Priority,” will be presented by the 2018 Indianapolis Prize Winner, Dr. Russell A. Mittermeier and is part of the college’s 2018 Homecoming Alumni Weekend festivities.  Mittermeier will also present lectures at Harvard University, Indiana University, Purdue University College of Veterinary Medicine, Butler University and DePauw University.

Mittermeier, currently the chief conservation officer for Global Wildlife Conservation, is considered a conservation icon.  He has spent more than 45 years in the field protecting species and the vital ecosystems on which they rely.  He has observed more primate species in the wild than anyone else.  In part because of his efforts, primates remain the only larger group of mammals to have not lost a single species or subspecies to extinction in the last 100 years.  Mittermeier’s focus on biodiversity hotspots — critically important areas known for their biological diversity and endemic species — has taken him on expeditions across 169 countries and all seven continents. On that quest, he has discovered more than 20 species new to science and has eight named after him.

The Indianapolis Prize is the world’s leading animal conservation award.  First awarded in 2006, it is given every other year to an individual who has made extraordinary contributions to wildlife conservation.  Established to bring the world’s attention to their victories, the Prize elevates the brave, talented and dedicated men and women who spend their lives saving the Earth’s wildlife.

The lecture is free, but registration at www.franklincollege.edu/indianapolis-prize-lecture is appreciated.

Visit IndianapolisPrize.org to learn more about the Indianapolis Prize initiative, Prize Winner Russell A. Mittermeier, Ph.D., and the upcoming gala.

For more information about the lecture, contact the Office of Communications at (317) 738-8185.