Franklin College alumna Taylor McElwain — a spoken word master, a diversity champion and sociology major — applied to 13 schools before applying to Franklin. In fact, Franklin wasn’t even on her radar. But she says it’s the most life-changing decision she’s ever made.

“Something was telling me to go to Franklin. I can’t imagine going anywhere else. I’ve grown in ways I never thought possible, and I know if I had gone to a big school, it never would have been the same.” – McElwain 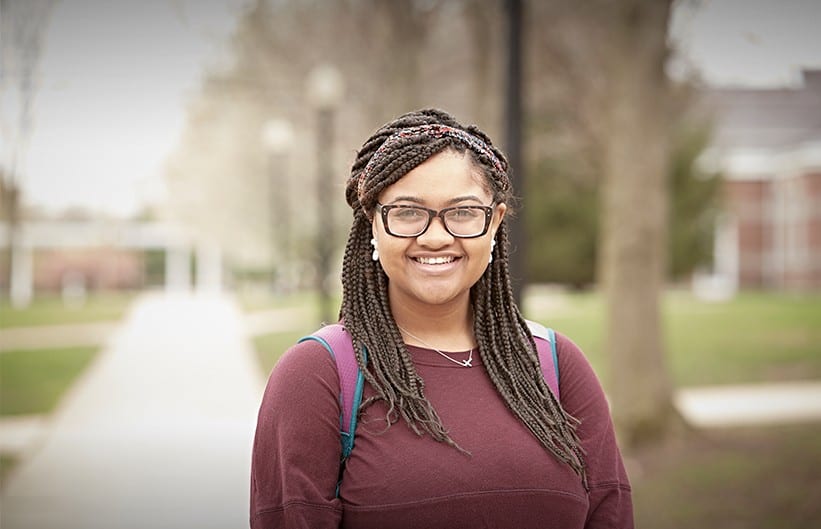 Taylor attributes her transformation to two things — or rather two people: Terri Roberts-Leonard and Cheryl Crane, Ph.D. Terri is Franklin’s director of diversity and inclusion. On top of babysitting for Terri’s kids and affectionately referring to her as Auntie, Taylor worked closely with Terri to coordinate events that supported diversity on campus.

“She pushed me to be confident as a black woman and student of color on campus. I got to be a voice on campus and use that as my platform for social movements,” said McElwain.

“She shined brighter here. At a big school, you can’t be in multiple leadership positions at the same time; there are too many students. We don’t have those rules, so here she could do more.” – Roberts

While Taylor promoted social change on campus as a leader and advocate, she learned about social movements in the classroom with assistant professor of sociology Cheryl Crane, Ph.D. The two grew closest when Taylor took Cheryl’s “The Beyoncé Effect” — a course that analyzed the modern feminist movement through the lens of popular music. The idea for the course came from a discussion in Cheryl’s gender and sexuality class, and when her students responded with excitement, she started putting the course together.

“If you go to a liberal arts school, you can dive into your passions. Our professors cater to that – no matter what we’re studying. Even when I don’t believe in myself, my professors believe in me.” – McElwain

That’s the beauty of Franklin: it’s easy to pursue your passions. For Cheryl, that means analyzing Queen Bee’s impact on race, class and gender. For Taylor, that meant finding her voice as a young social justice warrior so she can go on to change the world.

“I encourage students to take advantage of the size and scope of Franklin to experience what it’s like to create social change. Their impact will be felt at Franklin. They can create waves here.” – Crane