Business major Reilly Jones always looked forward to her religion classes. Armed with the previous night’s reading and an arsenal of questions, she often sat perched on the edge of her seat, ready for the day’s discussion.

When she completed the religious studies requirement, she kept signing up for additional classes each semester. Religious studies professor James Alexander, Ph.D., couldn’t help but notice Reilly’s face popping up in many of his classes – even though they had nothing do with her major. Recognizing her enthusiasm for the field, Alexander encouraged Reilly to take on a religious studies minor. 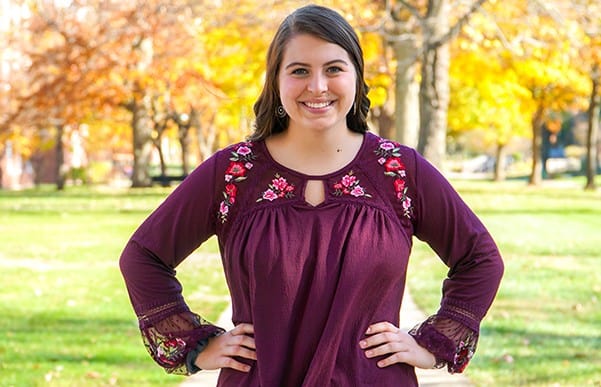 Though religion classes fascinated her, she had never considered this area as a serious field of study for herself. “I had not identified religious studies as an area that I wanted to pursue throughout my whole first two-and-a-half years. Because of the proximity and the relationship that developed between Professor Alexander and I, he pushed me to consider what it would look like to add that as a second semester junior. I wouldn’t think that is too common at other schools.” – Jones

Declaring an entirely new minor so late in game daunted Reilly at first. However, thanks to a supportive team, the senior unlocked a new possibility for herself after college. “Franklin opens doors to new areas of study that most people will just say is a passion. Now I’m fully considering pursuing religious studies in graduate school.” – Jones

Reilly acknowledges that without the close bond she has with her professor, she may never have picked up the minor at all. So, how was she able to grow that bond so easily?

“One of the benefits of coming to Franklin that I didn’t even realize is that I’m getting the same professors multiple times. So, I’m having positive relationships with professors who aren’t just my academic advisor or anything like that.” – Jones

Faculty at Franklin College are committed to helping students recognize their potential and encouraging them to pursue their passions. That’s why we often refer to them as faculty advocates.