Finding her place at Franklin in Greek life

When one thinks about Franklin, Indiana, they probably don’t think of a strong Greek presence. However, this presence is exactly what Kylie Heckert, a junior at Franklin College majoring in Psychology and Criminal Justice, found when she arrived on campus.

Kylie’s Greek experience didn’t include togas or column-heavy architecture — hers was based in finding a new home in her current sorority, Tri Delta. 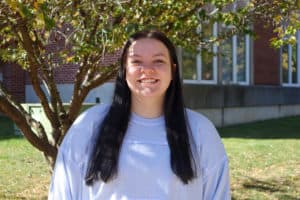 When she first arrived on campus, Kylie didn’t have any plans on joining Greek life. In fact, she said she “wouldn’t have gone Greek if it weren’t for Franklin.”

What makes Franklin different from other schools? “The smaller community . . . the people here support you unconditionally,” something that Kylie said is unique to both the town and campus community. This support has allowed Kylie to thrive at Franklin.

She is the president of Tri Delta, in addition to being the secretary of both the Student Congress on campus and Psi Chi (the psychology honors society) as well as a member of Student Entertainment Board and additional honors societies, Alpha Kappa Delta (sociology) and Alpha Lambda Delta (first-year students).

Given all of these exclusive opportunities that Kylie has seized advantage of during her time at Franklin, it seems obvious that she must have had some predetermined plan to maximize her potential before even stepping foot on campus, right? Not exactly.

“I picked Franklin because it’s a pretty campus and because my mom went here,” Kylie said. “I only knew about it because of her.”

Her mom convinced Kylie to come do a self-tour of the campus, on which she was able to see all the students engaging with each other, something that ultimately played an integral part in Kylie’s choosing to attend Franklin College.

Engaging with other students wasn’t the easiest thing to do in Kylie’s first year on campus, however; she got here during the height of the COVID-19 pandemic. But she stuck it out, thanks to some connections from Tri Delta that made it easier to branch out into other organizations, as well as the one-on-one connections she formed with her professors due to Franklin’s small class sizes.

One of these connections led to an internship opportunity ­­— serving as a victim advocate for Adam Wells Crisis Center. Kylie describes herself as “always [being] the friend that people went to for help,” making the leap to victim advocacy more like a skip. Another thing that eased the transition was how prepared she felt by Franklin’s psychology department.

“In the sociology department, we had classes that looked into crime statistics, specifically about domestic abuse,” Kylie said. “And in the psychology department, we learned the terms and phrases that helped us be able to talk to victims of that type of violence correctly.”

Franklin’s classes not only served Kylie’s major — they prepared her for the real world in tangible, applicable ways.

Kylie hopes to continue her interest in victim advocacy post-graduation, saying that the type of places that usually hire victim advocates (and, by extension, have victims to advocate for), are inherently “under-resourced, under-educated, and there is always more going on behind the scenes of these situations . . . these situations have effected everyone’s lives in some way.”

Armed with the support of her professors, her sorority sisters, and her entire campus community, Kylie will undoubtedly be successful in advocating for any underprivileged person she works with. When one thinks about Kylie’s future, they should see a woman striding confidently toward a career in victim advocacy, with the three delta Greek triangles emblazoned on her shirt, a reminder of the support and ability that Franklin College has given her.