Would You Rather Be Ignored at a Big School or Receive All the Help You Need at a Small School?

You’ve heard debates: big university vs. small college. While prospective students search for their perfect secondary education institution, they learn about the advantages and disadvantages of both types of schools. However, not many students will experience both small schools and big schools firsthand. Franklin College Senior Kyle Harmening attended a small and big school during his college career. His verdict? Small schools are better.

Hailing from Whiteland, IN, Kyle originally attended Franklin College but left the small campus to try a bigger college on for size. 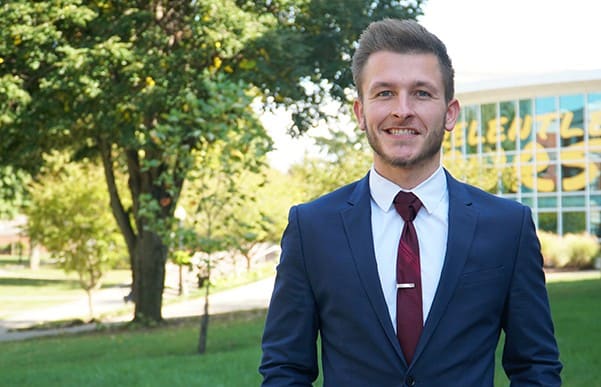 “I actually transferred from Franklin College to a larger public school for a month and was devastated by how much I hated that school. So, I transferred back to Franklin College. I realized a small-time atmosphere is way better than a big atmosphere. Getting that first-hand interaction with professors is the best.” – Harmening

The political science major’s biggest problem with the larger university was the professors’ seeming indifference towards his education. At one point, he even emailed his advisor, and the professor did not reply for two weeks.

“Especially when compared to a school where the professors are paid to research and just teach on the side, that type of institute is not ideal because the professors aren’t as driven to teach their students. But these professors at Franklin College are way different, and they’re actually driven to help you pursue your goals.” – Harmening

“When I was in the theatre department, due to my scheduling with my kid and working part-time, I wasn’t able to make all the rehearsals for Round and Round the Garden. So, Robin Roberts would help me between classes and other random times. He would one-on-one help me with my lines for the production on his own time. All the professors I’ve met here are like that. They’ll go out of their way to help you.” – Harmening

Thanks to his collaborative efforts with Robin Roberts, Ph.D., Kyle won the Robert Wise Award for acting. Quite a leap from not hearing from his other advisor for two weeks. At Franklin, professors are here to do more than lecture. They’re committed to taking an active role in helping you reach your goals. Don’t settle for anything less.