When you hear someone say they’re in a frat or a sorority, what do you picture? Do you imagine a bunch of guys running around in bedsheets yelling “Toga! Toga!” Or Elle Woods discussing Delta Nu’s toilet paper debacle in Legally Blonde?

These are the images Kirsten Nielsen always associated with Greek life. Before coming to college, she figured fraternities and sororities were synonymous with shatterproof cliques and perpetual partying, none of which interested her.

So, she was surprised to find herself participating in Rush Week in her first year at Franklin College. Having heard about the different opportunities Greek life had to offer students, she decided to give it a try. 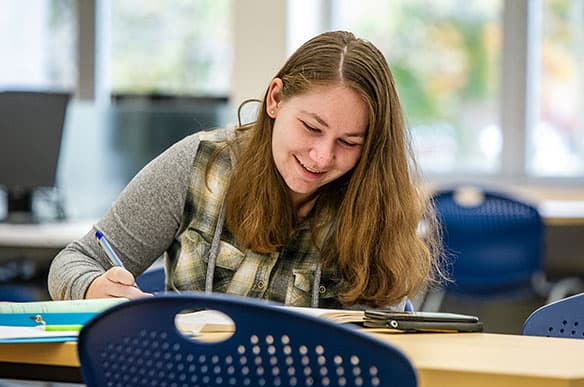 “Going through recruitment, I kind of had to come out of my shell a bit during that moment because it’s crazy. You’ve got all these girls yelling and singing songs.” – Nielsen

Despite the semi-uncomfortable beginning, the speeches about networking potential and leadership positions excited Kirsten. When she got a bid from Delta Delta Delta (aka Tri Delta), the political science/Spanish double major jumped at the chance.

“Once I joined the sorority officially, I realized it also really doesn’t let you hide. I put my name in to run for positions my freshman year because I like being involved in things.” – Nielsen

As she became more involved, Kirsten realized sororities offered more opportunities than she had imagined. She honed her leadership skills by serving in various positions, and even became a member of Franklin College’s Panhellenic Council. There, she collaborated with all of Franklin’s Greek life chapters and saw first-hand hard work, leadership potential and unshakeable ambition.

“I am thankful that I put in a lot over the last three and a half years, because without that, there’s a lot of opportunities I don’t think I would have had. I’ve had the ability to grow through leadership.” – Nielsen

As a senior, Kirsten says what made her Greek life experience so special was that it took place at Franklin College.

“I wouldn’t have understood how they all worked had I not joined Greek life. It’s one of those things that people are always going to think of the stereotypes first, but I’m really glad that Franklin has allowed our organizations to grow without fear of stereotypes.” – Nielsen

Franklin College strives to maximize each student’s college life by encouraging students to dive into new experiences and take chances. Like Kirsten, many find they thrive where they least expected to.