You know it’s spring at Franklin College when the trees on Dame Mall start to bud out, squirrels scurry across campus and hammocks can be spotted along the way. Spring signals renewal and new beginnings. For the average senior, the arrival of spring starts the countdown to graduation and the start of official adulthood. 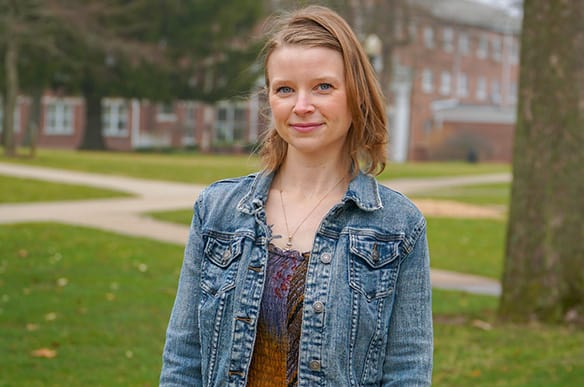 Senior Jessie McClain, however, is not your average senior. At nearly 34 years old, Jessie is primed to graduate this year with a degree in public relations. Though her trajectory may be a bit unorthodox, she landed right where she was meant to be.

Jessie originally planned to work as a massage therapist. But after a stint in trade school, the life of a masseuse lost its appeal. Her next stop – Franklin College.

Starting college as a 30-year-old, Jessie worried about being the only millennial on a campus brimming with zoomers.

“My first semester, I was really nervous. I’m a non-traditional student. So, I felt out of place. It was a world full of people 10 years plus younger and felt like a totally other generation.” – McClain

Jessie feared she wouldn’t be able to relate to her peers. So, she decided the best course of action would be to get in and get out.

“I went to college that first semester with the intention of just doing my work, getting my degree and getting out.” – McClain

But Franklin College students surprised Jessie. From the smiling faces on Dame Mall to the jovial classroom introductions, Jessie knew early on that she had misjudged her classmates.

“A lot of the people were very inclusive, they didn’t care about my age, or my background, or my family status, or anything. They just included me into groups and into friendships and into their circles.” – McClain

Like a Gilmore Girls­-esque Stars Hollow, Franklin’s small cozy environment swells its inhabitants’ sense of community. As a result, Jessie felt embraced rather than isolated and even found some of her closest friends.

“I don’t know if I would have got that on a bigger campus where people may not have cared as much about if they even introduced themselves to me.” – McClain

Regardless of season, new friendships bloom on our campus every day. Franklin College’s inclusive environment ensures all its students thrive.