Not everyone is passionate about art but, for Haven Tunin, art is more than a passion; it is her business and life goal. 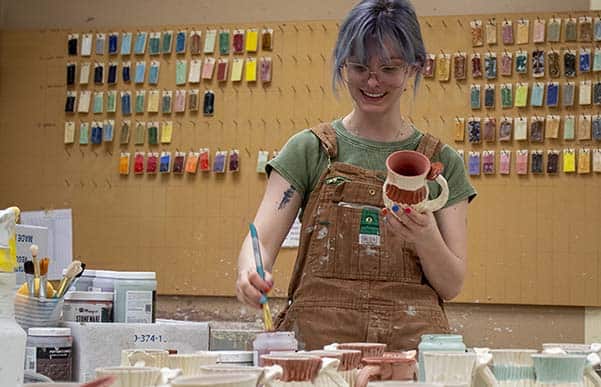 Tunin came to Franklin College as a generalized art major but quickly switched it to be more specific. First, she was going to be a painting major. Then she changed it, landing on her final major – ceramics. “I did ceramics my sophomore year and did not like it at all,” said Tunin. “I took it again and it wasn’t until the end of the semester the second time I took it that I fell in love with it.”

After she figured out what she wanted to study, Tunin began exploring career path options and attending art shows. Working closely with faculty member David Cunningham, Tunin obtained an internship and realized she could not only have ceramics as a hobby but a true business.

“David Cunningham has pushed me more out of the student range and more into being a real-world artist,” said Tunin. “He has a friend named Adam, that I did an internship with and saw him selling art. It was seeing him do that and how he interacts with customers that made me want to start an art show.”

Falling in love with how the shows worked, Tunin became more comforted in her career decision. She knew she was in the right place.

“I really like the aspect where I get to talk to people and get to know people,” said Tunin. “People come to art shows for the same reason [as dinners]: to drink and hang out.”

Since attending her first art show, Tunin and developed a business of her own. In November of 2020 she posted a Tik-Tok video of her mushroom mug that went viral. Shocked, Tunin began making more. Finally, in August of 2021, Tunin had gained enough confidence to begin selling her pieces.

While she has had a lot of success and has been doing art since she was little, Tunin just started selling it. With the influence of her professors at Franklin, Tunin realized her potential and is prepared to graduate in 2022.

“There is so much technical stuff you have to learn,” said Tunin. “People don’t realize they have the capability to make good work… It was the Tik-Tok that made me think “Oh, people actually like this; I want to make more.”

You can realize your potential and embark on your career at Franklin College.