Confidently Prepared for the Workforce

The start of Evan Graham’s career is inching closer and closer. A senior sports communication major, he is anticipating his May 2021 graduation and the start of his new path with confidence gained from his Franklin College education. 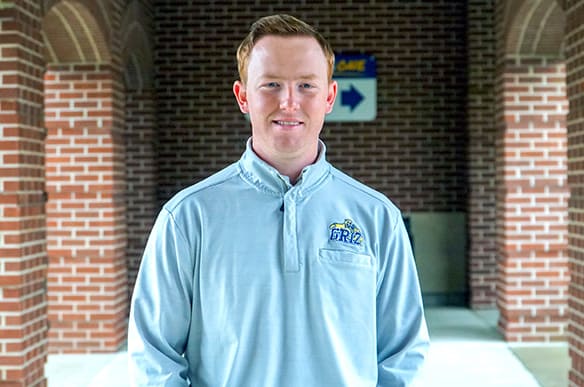 “The faculty at Franklin is there to help you start your career. Each one of them sees our strengths and weaknesses, tells us what those are, and then helps us learn.” – Graham

These past four years at Franklin College have been a time of personal growth for Evan. Between eye-opening classes and exploring the world outside his bubble, his time at Franklin transformed him. “Franklin College has helped me become more of the person that wanted to be when I was younger.” – Graham

Amid the stress related to balancing a busy college life, Evan discovered a source of stable support: his professors. One professor who left an especially strong impression on him was his academic advisor, Joel Cramer—the Mr. Miyagi to his Ralph Macchio.

“What makes Joel good at being an advisor is he gives a student advice and lets them make the decision on what they want to do.” – Graham

Evan doesn’t just use Joel’s nuggets of wisdom for his college career. The Franklin College golfer also seeks his mentor’s feedback on his personal pursuits.

The summer after his sophomore year, Evan started a blog dedicated to the Indiana Pacers. Having learned the fundamental “wax-on’s and wax-off’s” of website building from Joel, he reached out to Joel for feedback and the pair met at a restaurant halfway between their hometowns to go over Evan’s blog in person.

Joel’s support for Evan is just one of many similar examples. Franklin College professors are dedicated to your success – inside and outside the classroom.