The Myth of the Math Major

Franklin College’s liberal arts curriculum repeatedly proves beneficial for every graduate. Every student is exposed to a wide variety of disciplines. Biology majors can read the best Oscar Wilde has to offer, while art majors enjoy at least one class that involves a calculator. However, the college’s non-traditional but effective teaching methods do not stop there, as junior swimmer, piano-player and triple-math-major Dylan Harker found in his classes.

In the midst of earning his three majors – Pure Math, Applied Math, and Quantitative Analysis – Dylan realized the FC math curriculum teaches a skill that math departments at other schools may not: communication.

“Communication is one thing the math department here pushes that I feel I wouldn’t learn at a large university. At big schools, you may learn the material just as well as we do here, but you don’t learn the skills to communicate what you know to people who don’t have a degree in math.” – Harker 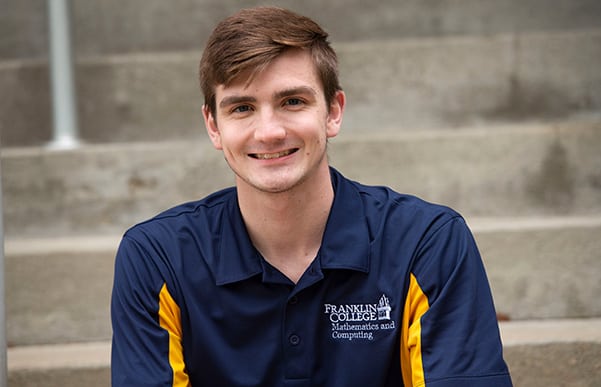 The department of mathematics incorporates written and verbal explanations of problem solving into lesson plans not only to assure that the students understand the material but also to allow them to grow as communicators.

“I’ve had to practice at knowing the material and being able to explain it to people. I’ve had to practice communication skills to get my point across, putting math into terms that other people can understand, not just the way it works in my head.” – Harker

The ability to communicate clearly serves Dylan well. In 2018, the college awarded the math major the Lancers Trophy, a prestigious award given to two Franklin College sophomores who demonstrate the signature Franklin College values both in and out of the classroom.

As Dylan prepares for an even busier senior year of swimming and a possible undergraduate research project, he knows the communication skills he gained from the department of mathematics will help him in his remaining college years and well into his eventual career because, as Dylan puts it, “Even with a degree in math, you’re not very beneficial in the workplace if you can’t communicate.” – Harker

The world needs more than just a major. It also needs people with a diverse skillset that goes beyond textbooks. Don’t settle for an education that will take you halfway there. Trust Franklin to prepare you for life after college.