Brewing up something special at Franklin

Devin Byers, junior at Franklin College and double major in psychology and music (vocal and piano track), keeps a notebook of all the different coffee shops he has been to in America. The allure of your typical coffee shop is evident – the laid-back atmosphere; the quiet space in which to work; the feeling that you are sitting in community with other people, all working individually but joined in the knowledge that they’re all there for some similar purpose. This allure is what draws Devin to these coffee shops across the country like a moth to a particularly bright (and caffeinated) flame. It is also the same feeling he gets when he reflects upon what he likes most about attending Franklin College.

Despite its size, Franklin attracts people with a variety of interests, some of which include keeping 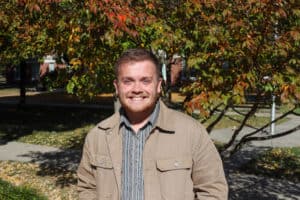 detailed accounts of coffee shops visited. However, this notebook is not the only thing that makes Devin unique on campus. The thing that immediately stands out about Devin is his academic success: Devin holds a 3.95 cumulative GPA across three years, with a 4.0 in the psychology department specifically. He has also been inducted into Psi Chi, the national psychology honors society of which he is Vice President, and was accepted into 11 of the 12 colleges to which he initially applied. Despite this wealth of options, Devin chose to attend Franklin.

“The atmosphere of the town itself is the biggest draw,” Byers said.

Devin said he particularly enjoys the “small-town vibe,” the patented Midwestern friendliness and the coffee shops.

Devin’s affinity for Franklin extends to the campus, too. This is evident when one recognizes the sheer number of organizations and activities he participates in on campus. In addition to his aforementioned participation in Psi Chi, Devin is in two different FC choirs, Men’s Chorus and FC Singers. He regularly attends Franklin College Intervarsity meetings and events. He has attended and participated in Big Man on Campus, a campus-wide talent show held to raise money for sorority ZTA’s breast cancer awareness philanthropy. He has sung solos, duets and in trios as part of his participation in choir and he has been parts of choral groups that have sung the National Anthem before Franklin football games. Devin has had the opportunity to work as an ambassador for the College’s admissions office, speaking to prospective students and alumni to convince them to attend the college and donate, respectively. On top of all of that, Devin holds two jobs, one at Main and Madison Market Café in downtown Franklin and one as a shift manager at McDonald’s.

Devin credits the help of professors for his ability to juggle all of these responsibilities.

“Once you get into your major, your class sizes become 5-15 students,” Byers said. “This allows the professors to genuinely work with you individually, and fosters connections between students and their professors long-term.”

In fact, one of these professors is the reason Devin stayed involved with music at all: after having been in choir throughout high school, Devin had no intention of continuing his music path prior to coming to Franklin. That changed when Dr. Casey Hayes, music program department chair, reached out to him and gave him more information about the Franklin music program, as well as scholarship opportunities.

This encounter proved to be vital for Devin. Devin found a renewed passion for the art while at Franklin. Dr. Hayes continued to be instrumental as well  helping find Devin an internship doing music therapy, an internship that combined both Devin’s interest in psychology and his interest in music. Dr. Hayes not only found the internship for Devin: he asked for Devin’s schedule and interests and worked specifically to set up on internship based on those criteria, contacting multiple different places on behalf of Devin until they found something that he thought would be a good fit.

Devin said during this internship, he “had the chance to observe/assist during teletherapy sessions, house-visits, and office-visits . . . work with individuals, ranging from ages 3-60 years old . . . and work with a variety of developmental disorders, including individuals who are: blind; diagnosed with autism,  down syndrome, epileptic, or diagnosed with a learning disability, as well as a handful of unique disorders.”

The internship gave something Devin equally as valuable as uncovering a new career path — deciding what he did not want to do. After this experience, he realized he wanted to go the mental health counseling route, as that path offers a “wider array of clients that have more advanced disorders.”

This type of complexity was something Devin had to navigate as an incoming freshman during the height of the COVID pandemic. He said that in addition to the usual freshman fears and worries about socializing,

“Being a commuter made [the transition to college] double-hard. It was difficult to get connected, make friends, get involved,” Byers said. “I mean, you had to sit two seats away from everyone in class and I didn’t live in the dorms; I had to find a way to get involved on my own.”

That involvement came from asking around one what came to be one of Devin’s on-campus support groups: his men’s choir. The older students in that group gave him some suggestions as to which events to attend and helped Devin feel more comfortable during that transitory period of his life.

This comfort may have been much harder to come by had the faculty of Franklin College not noticed Devin and made a concerted effort to reach out and get him involved in choir, an effort mirrored by every other department on campus for their own individual students.

“At Franklin College, you are truly not just another face on campus,” Byers said. “You really get to know all your colleagues in your classrooms, and the relationships you gain are more than just relationships they’re mentorships. The opportunities you get at FC go beyond just sitting in the classroom listening to lectures — it is discussion-based courses, learning-based courses. And you get tons of professional development opportunities . . . everyone at Franklin gets involved.”