Originally from Mexico, Carolina Puga Mendoza came to the United States with her family on her mother’s work visa and attended Fishers High School. 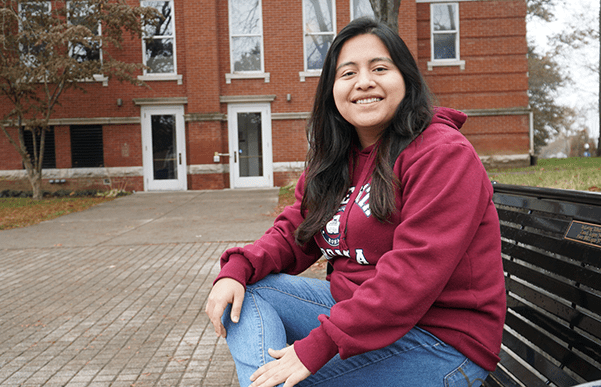 While frantically trying to figure out what to do with her life, Puga Mendoza noticed an email from Franklin College offering a full-tuition journalism scholarship. Throughout high school, she had been exposed to Franklin through the Indiana High School Press Association. Immediately, she filled out an application and later got an invitation to compete for the scholarship.

“I practiced my interview several times,” said Puga Mendoza. “I was the last one to be interviewed so it was nerve-racking.” However, the wait proved worthwhile as she received a call in early February notifying her that she had been awarded the scholarship.

As an international student, Puga Mendoza had extra paperwork to fill out, as well as an extra international fee when applying to college. Since then, Puga Mendoza decided to transfer her visa to be a student visa under the school. While this can be a tedious procedure, Lisa Mahan and other staff and faculty provided their support, making Puga Mendoza feel more relaxed during the process.

She has also participated in the travel abroad program, including traveling to Europe for the spring semester of 2020. When the pandemic hit, because of her status as an international student with a visa, she was unable to get home. Nevertheless, all her professors, friends, and even the president of the college immediately offered their support in many ways – words of encouragement, extended deadlines, and even heartfelt care packages.

The people of Franklin College exhibit caring daily. Discover your place in the community.