In an episode of the television show Full House titled “Sea Cruise,” Joey gives Danny this piece of sage advice: “That’s how life is. It’s a struggle. What helps you get through the tough times are the people by your side.” While it’s a cheesy message from a cheesy show, it’s a truth that Franklin College senior August Hartzell can attest to. She found when life gets tough, even the tough need a strong support system.

How do you look for that support system? According to August, start small. 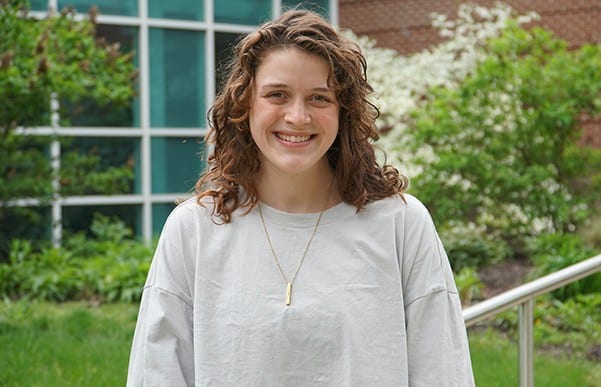 The women’s swim team member always assumed she would attend a large university. Her idea of college was mostly shaped by TV shows where the teenage characters wanted to go to Ivy League schools. Big schools just seemed to be the norm.

But during her college search, August unexpectedly gravitated towards a small liberal arts school: Franklin College.

“I am now at a campus of 1000 students. And I now realize that college is a lot more about making those personal connections than it is about going to a school with 40,000 other people.” – Hartzell

Attending a college that is the size of a small city has a lot of benefits – but a lot of glaring drawbacks as well when compared to the one-on-one support you can get at a smaller school. For example, during a Thursday meeting, August’s professors convinced the exercise science major to apply for a graduate school program, but the application deadline was the following Monday.

Putting a graduate application together involves gathering transcripts in order, writing a personal statement and filling out the multiple pages of the application itself. To do it in four days, seemed impossible, but August knew her professors would not have recommended it if they didn’t think she could do it, and they were willing to help.

By Monday, August had a robust application prepared and ready for submitting. Those stressful four days were worth it just to see her professors coming together to encourage her to take a chance. This type of support is not likely to happen at a larger university where big class sizes and research requirements for professors become obstacles for students.

But on the Franklin College campus, individualized attention from faculty is the norm.

“Franklin has taught me to take chances for what I believe in. I’m not going to back down from career goals because they can seem scary or unattainable. Instead, I’ve realized I have the knowledge and I have the skills. I have everything I need.” – Hartzell