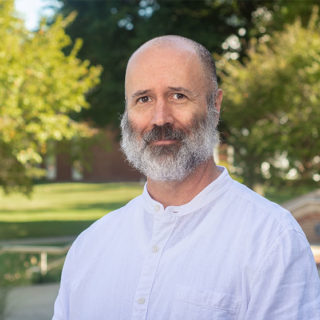 Why do you frequently take students to France during Immersive Term?

I enjoy taking students to France during Immersive Term not only because French culture was an integral part of my childhood, having been born to French parents who each emigrated to America before the Second World War, but, more importantly, because of the way in which American culture and French culture have been in dialogue with one another since America’s founding. There’s something about the ways in which each culture thinks and feels about the other that not only fascinates my students and me but that has fascinated countless American and French writers and artists before us.

What is your favorite course to teach?

This is a tough question to answer because every course I teach challenges me in a different way; however, if I were forced to choose, I would say Shakespeare is my favorite course to teach because of the way Shakespeare gives voice to his worlds and because of what those imagined worlds say about the real world in which we live.

“Dr. Erable teaches his students to think critically, a less tangible skill that’s far more valuable than reciting facts and dates. His pedagogy epitomizes the true value of a liberal arts education, challenging students to think and learn in new ways. As his student and later as a tutor for his courses, I saw first hand the attention and consideration Dr. Erable gives to every lecture he prepares, every student he teaches, and every essay he grades. I can say nothing but positive things about his enthusiasm for and commitment to delivering Franklin College’s student body a world-class education.” – Samantha Parker ’11

My Favorite Work of Literature

My favorite work of literature is King Lear by William Shakespeare because it reminds the audience that human kindness, though all too rare, is our most redemptive trait.