Generally speaking, college life consists of attending classes, eating with friends in the cafeteria, participating in study groups and joining a club or two. Add to that list reviving an entire fraternity chapter from scratch and you have the life of Franklin College alum Brandon Eades.

For the past year, Brandon has been bustling around campus to bring the Phi Delta Theta fraternity back to Franklin College. “In the spring of 2019 they approached me about the organization coming back because I wasn’t involved in Greek life, but I had a lot of leadership positions. In the fall, they were like, ‘What do you think?’” – Eades 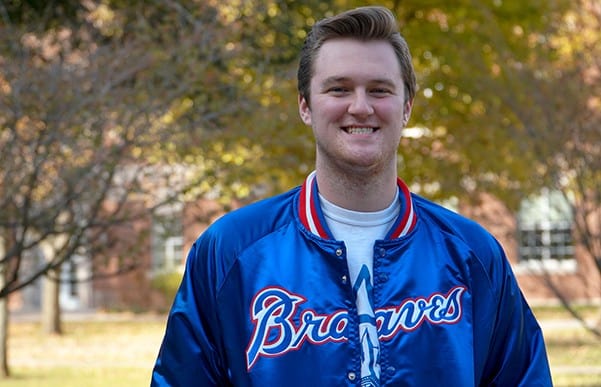 This monumental task captured his imagination. After some deliberation and negotiation, he decided to take the plunge. At first, the project seemed doomed to fail. Brandon knew he and his seven freshman recruits had a tough battle to fight.

“Starting Phi Delt, I have learned how to fail and how to pick myself back up and move onto the next step. For a while there, it wasn’t looking very good – our progress, especially after COVID. But now, a lot of people look at our chapter and ask how I’ve done this.” – Eades

So, how did he do it? Revitalizing Phi Delta Theta called for a hardy mixture of hosting events, hanging flyers, posting on social media, and, as Brandon puts it, confidence in yourself.

“I had to be willing to put myself out there and market. People just kept signing on and here we are as the fastest growing organization at the school.” – Eades

Now a senior, Brandon serves as Phi Delt’s president. He credits the Franklin College community for giving him the confidence to accept the challenge and lending a hand along the way.

“I just had a lot from help from some of the alumni. The other student leaders having the confidence in me inspired me to go for it. They encouraged me to do it. They were like, ‘If anyone is going to bring it back, we think you could do it.’” – Eades

At Franklin College, the opportunities are so diverse, you never know what challenge will come next. But it’s guaranteed that you’ll never face it alone.