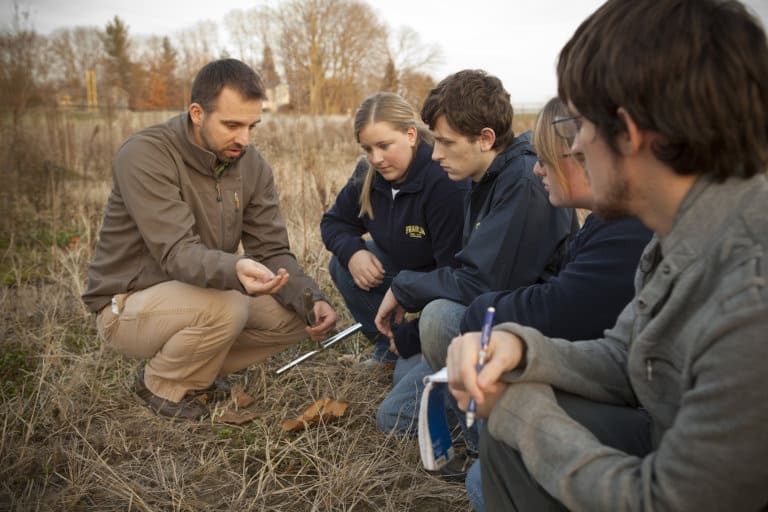 Franklin College Associate Professor of Biology Ben O’Neal, Ph.D., has been awarded a $100,000 extension on a grant originally received in 2016 from the Indiana Department of Natural Resources and the U.S Fish and Wildlife Services’ Wildlife and Sport Fish Restoration Program.

The 2016 grant for just under $45,000 allowed O’Neal and eight of his students to study the migration patterns of mallard ducks in urban areas of Indiana and Illinois.  The extension will allow O’Neal and three additional students to continue the research.

“A major goal of this project is to provide opportunities for Franklin students to engage in applied research,” said O’Neal.  “Student researchers contribute through development of methods, execution of field work, data analysis and presentation and publication of findings.”

The objectives of the research are to examine the movements of mallards that breed in developed areas in central Indiana; to assess the extent to which mallards that inhabit developed areas contribute to overall mallard harvest in Indiana; and to examine the spatial and environmental characteristics of the areas in which urban mallards are harvested relative to the area in which they were banded.

With much of the historical wetland acreage of the Midwest now gone, the mallard population in the Midwest has come to rely heavily on urban wetlands like those in neighborhoods, golf courses, and parks.  Little research has been done to examine the functional ecology of urban-dwelling ducks.

“Over the course of the four-year project, we aim to capture and band 2,000 mallards.  This robust sample size is needed to effectively examine movement, harvest, survival and disease transmission,” said O’Neal.  “We will begin final analysis in 2019, but our initial findings are already beginning to tell an interesting story.”

“Ultimately, these findings will allow federal and state agencies to make informed decisions affecting humans, wildlife and the environment as a whole,” said O’Neal.

In addition to the basic science and management insights, this project also offers an opportunity to help educate the public about the value of wildlife in areas where humans and wildlife intersect according to O’Neal.